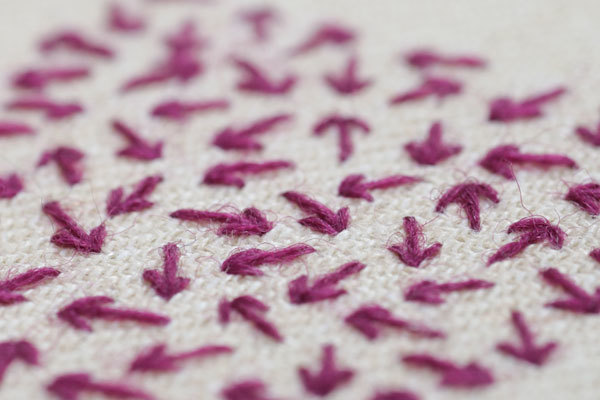 Crewel work embroidery, which is also known as Jacobean crewel work, reached its peak in 17th century England, and was later taken to the America Colonies.

What is Crewel work?

Crewel work is a surface work embroidery using worsted 2-ply crewel worsted wool on a natural strong linen twill. It is a heavy weight embroidered technique used traditionally for furnishings such as curtains, cushions, panels, and often worked on a large scale.

Traditional Jacobean designs are based on the tree of life, and combine flowers, foliage, fruits, birds, beasts, and animals, grown from a central stem from a hillock base. Design elements are often out of proportion to each other with the design based more on balance rather than accuracy.

Colours used traditionally are predominantly blues, browns, greens, and other natural shades which are generally softer tones relating to nature, and/or natural dyeing.

Come and join us at the studio or online - we can teach you specific skills or give you a general overview of techniques.

All Studio Classes All Online Classes

All Articles
A Basic Silk Shading Tutorial . . . .
Silk-shading uses a number of colours in cotton or silk threads, skilfully blended together to create the natural appearance of a flower, fruit, plant or animal.
An article in interweave.com
An interview I had with Kathy Troup about my background and how I work.
TextileArtist.org
Interview with TextileArtist.org which is a great place for textile artists and art enthusiasts to be inspired and communicate with like-minded creatives.
Sign up to our mailing list

We may from time to time send emails about things we think may interest you. Please enter your email address to receive them.